In this article we will discuss the history, origins, stories, MySQL’s past and future.

The story of UNIREG and Tcx

Monty works for a company called TcX in Sweden. In 1994 TcX began developing web-based applications, and plans to use UNIREG as its database system. But unfortunately for Monty, UNIREG is considered unsuitable for dynamic databases such as the web.

TcX tries to find alternative database systems, one of which is mSQL (miniSQL), an RDBMS that is not too expensive and almost open source, meaning that if you buy this application, you will also get the source code too. However, mSQL version 1 also has a disadvantage, which does not support indexing, so the performance is not too good.

With the incitement of TcX officials, Monty tried to contact David Hughes (the programmer who developed mSQL) to ask if he was interested in developing a connector in mSQL that could be linked to UNIREG ISAM so as to support indexing. At that time Hughes refused, arguing that he was developing an independent indexing technology for mSQL version 2.

Due to David Hughes’ rejection, TcX (and also Monty) finally decided to design and develop their own new database system concepts. This system is a combination of UNIREG and mSQL (the source code can be freely used). So in May 1995, a new RDBMS, called MySQL was released.

David Axmark of Detron HB, a TcX partner, proposes that MySQL be ‘sold’ with a new business model. He proposed that MySQL be developed and released for free. The company’s revenue can then be obtained from selling “support” services for companies that want to implement MySQL. A business concept that is also applied by other Open Source companies.

Origin of the MySQL Name

The origin of naming MySQL itself is rather unique. Monty said:

“It is not perfectly clear where is the name MySQL derives from. TcX’s base directory and a large amount of their libraries and tools have had the prefix “My” for well over ten years. However, my daughter (some years younger) is also named My. So which of the two gave its name to MySQL is still a mystery. ”

Various sources state, even on the MySQL site itself that “My” from MySQL comes from the name of Monty’s daughter. However, as quoted above, Monty also admitted that during her time at TcX, the library and application developed by the company also started with the prefix “My”.

The logo of the dolphin in the MySQL symbol is named Sakila, which comes from a contest “Name the Doplhin” hosted by MySQL AB. The name Sakila was proposed by Ambrose Twebaze, an open source programmer from Swaziland, Africa. ‘Sakila‘ has roots from the Siswati language, the language used in Swaziland.

Back to the MySQL story, in 1995, TcX changed its name to MySQL AB, with Michael Widenius, David Axmark and Allan Larsson as the founders. The “AB” title behind MySQL, stands for “Aktiebolag”, the term PT (Limited Liability Company) for Swedish companies.

MySQL AB is the company behind MySQL, providing services and being responsible for developing, marketing, and providing support for MySQL. MySQL itself was released with “dual licensing”, or two licenses namely the free version and the paid version.

The first license was released under the GNU GPL (General Public License – also known as No Use License). This GPL license frees you to use MySQL without paying royalties to MySQL AB, with certain conditions. For example, if you use MySQL in an application that you created, the application must also be free and be under a GPL license.

The second license is intended for commercial companies, as well as software developers who intend to sell their applications, and use MySQL as the database. For this purpose, you are required to purchase a commercial license from MySQL AB. For more information about MySQL licenses, visit the MySQL site.

MySQL AB also holds copyright rights from the MySQL source code and the owner of the trademark “MySQL”. In other words, even though we have the MySQL source code, the database system and the application that we make may not use the brand “MySQL” without paying royalties to MySQL AB. This also explains why one of the MySQL web-based administration applications, PhpMyAdmin, does not use the word “MySQL” in the name of the program.

The Ruler of the database market is approaching: Oracle and Sun Microsystems

In the following years, MySQL AB has grown. In 2002, MySQL AB had a new headquarters in Cupertino, California, United States, in addition to its home country, Sweden. Estimated active users have reached at least 3 million users.

Mårten Mickos, CEO of MySQL, confirmed that in 2006, Oracle had intended to buy MySQL, but Larry Ellison, Oracle’s then CEO, commented:

“We’ve spoken to them, in fact we’ve spoken to almost everyone. Are we interested? It’s a tiny company. I think the revenues from MySQL are between $ 30 million and $ 40 million. Oracle’s revenue next year is $ 15 billion. ”

A statement that was covered up, because that same year Oracle had purchased Sleepycat, a company that developed the Berkeley DB transactional storage engine for MySQL, even before Oracle had also bought Innobase, the company behind the MySQL InnoDB storage engine.

The year 2008 was the end for MySQL AB as a stand-alone company, when Sun Microsystems bought MySQL AB for US $ 1 billion. As the acquisition process, all MySQL AB management, become part of thousands of other SUN employees, including Michael Widenius (Monty) and David Axmark (2 founders of MySQL AB). But not long after, the two of them began to feel uncomfortable and often criticized SUN policies, so they decided to leave the company.

Mårten Mickos, CEO of MySQL AB, who has been leading MySQL also left SUN in 2009. So that MySQL has practically lost its business leaders and founders who have made MySQL as successful now. And finally April 2009, a giant in the database industry: Oracle, began approaching Sun Microsystems to acquire it.

The “Save MySQL” Movement

The news of this acquisition seems to be the end for MySQL. A “Save MySQL” movement was established to reject this acquisition. This movement was initiated by Monty Widenius himself (founder of MySQL), and supported by around 50,000 more developers and programmers from around the world. This movement urges the European Economic Commission to reject the acquisition of SUN Microsystem by Oracle. Various leaders of Free Software organizations also participated in this movement. 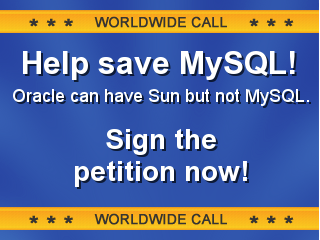 Acquisition of Sun Microsystems (and MySQL) by Oracle Corporation

This movement at least succeeded in persuading the European anti-monopoly commission, to approve the acquisition process on condition that Oracle continue the MySQL project at least until 2015. But many observers say that various pressures were also put on by Oracle to make the acquisition take place smoothly, so that Oracle Corporation officially acquired Sun Microsystems (as well as MySQL!) For US $ 7.4 billion on January 27, 2010.

The Future of MySQL

End of story in accordance with Oracle’s promise, until now (December 2017) MySQL can still be used free of charge. But, will MySQL remain like this going forward? or made one of Oracle’s paid products? we can only hope.

On the other hand, Monty Widenius, has secretly started a new project, MariaDB, which has the same basic code as MySQL 5.1. Is MariaDB the “next generation” of the free RDBMS successor to MySQL? or MariaDB will be drowned among other RDBMS who also appear a lot? let’s keep abreast of developments.

This story also at least illustrates how giant companies, such as Oracle, used their capitalist power to “annex” rivals to grow even bigger. MySQL now officially uses the oracle logo in its products.

Update (December 2017): MariaDB, the next MySQL

In my opinion, in the future MariaDB will be increasingly used. What’s more, the team that used to develop MySQL (including the founder of MySQL), is behind MariaDB. Based on claims from Monty, MariaDB is a version of MySQL that is faster, more efficient, and has various additional features that are not in MySQL.

Fortunately, in everyday use MySQL and MariaDB are not much different. All material that you will learn in this tutorial can be applied to MySQL or MariaDB.

For web programming like PHP, all MySQL functions that are also automatically supported in MariaDB. Functions like mysqli_connect () can be directly connected to MySQL or MariaDB, without any code changes. In addition, almost all the features in MySQL, are also available in MariaDB.

Learn Node.js : What is NPX? and What’s the Difference with NPM?

How to build a simple calendar with CSS Grid

How to Install Node.js on your PC / Mac.