Skip to content
Matob News / Hardware / What is a LAN Network? Definition, Topology, Advantages, and Disadvantages

What is :LAN? In the following article, Matob will explain the definition, topology, and also the advantages and disadvantages of the network.

Network refers to the set of devices (nodes) connected by communication links. A node can be a computer, printer, or other device capable of sending and/or receiving data generated by other devices on the network.

LAN is a computer network that connects computers in a limited area such as an office space, school, college or university.

A local area network, commonly called a LAN or Local Area Network, is a privately owned network, which provides a useful way to share resources between end users. Resources such as printers, file servers, scanners, and the internet, are easily shared among other computers connected to the network.

LANs are distinguished from other types of networks by three characteristics:

LANs use Wi-Fi or Ethernet to connect computers and devices on a network.

Wi-Fi LAN operates one or more wireless access points that connect to devices within the coverage area. These access points control the network traffic flowing to and from the connected devices. Usually the access point is a device called a wireless router.

Ethernet LAN consists of several devices connected to each other using an Ethernet cable (RJ-45) which is also often called a LAN cable or UTP cable (Unshielded Twisted Pair ). 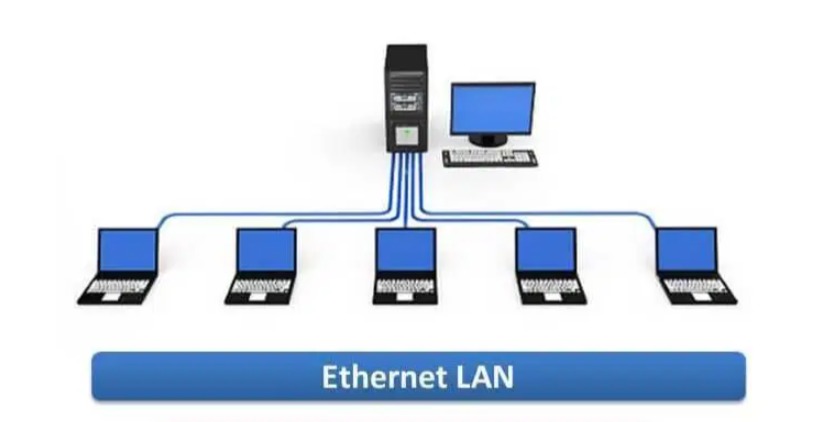 Although Ethernet and Wi-Fi are commonly used in most home, school and office based local area networks, due to their low cost and high speed, you can also set up a LAN with fiber optic which is more expensive and provides better communication speed compared to Ethernet LAN or Wi-Fi LAN.

Early generation LANs generally run at speeds of 10 to 100 Mbps but newer LANs can operate at speeds up to 10 Gbps.

LANs are limited in size, although they can fit one or two devices up to a thousand devices. Some devices such as printers, scanners and other servers remain permanently connected to the LAN while mobile devices such as computers, laptops, and phones may be connected and disconnected from the network at any time (not permanently).

Hotspot belonging to a cafe still falls into the LAN category even though in one day there are a total of a thousand devices that go in and out of the network.

The size of the LAN depends on the transmission technology used in the network. For example, the range of a Wi-fi LAN can be the actual coverage area of ​​a wireless broadband router while the size of an Ethernet LAN can be calculated according to the size of the cable.

In either case, however, the Local Area Network can be expanded to cover much greater distances if needed, by linking together multiple access points or cables using switches or hubs.

Various network topologies are possible to form a LAN but generally use the following three main topologies:

Bus topology : All devices are connected to a backbone cable called a bus. Bus networks are relatively inexpensive and very easy to install for small networks. Ethernet systems use a bus topology.

Ring Topology : All devices are connected to each other in the form of a closed loop, so that each device is directly connected to the device next to it. Ring topologies are relatively expensive and difficult to install, but they offer high bandwidth and can cover long distances.

Star topology : All devices are connected to a central hub device. Star networks are relatively easy to install and manage, but data flow bottlenecks can occur because all data must pass through the hub.

These topologies can also be mixed for better performance. For example, a bus-star network consists of a high-bandwidth bus, which connects a collection of slower-bandwidth star segments.