You often hear this term but don’t really know what BIOS is?

If you are a regular user of laptops and PCs, you must have seen them often. Because, all PCs choose the BIOS that is embedded in them from the factory, funds will appear when you turn on the PC from the shutdown position.

For beginners, the BIOS is only known as a tool to manage booting on a PC. In fact, the BIOS has a very important role in every operation of your PC. Even guys, a PC can’t run without a BIOS.

So, what exactly is BIOS? This time Matob will discuss the full understanding, function, type and workings of the BIOS for you.

The Basic Input/Output System or what is often referred to as the BIOS is a program written in assembly language that is in charge of managing the functions of the hardware contained in the computer.

Unlike the operating system on the hard disk, the BIOS is generally located on a flash memory chip or ROM made of Complementary Metal-Oxide Semiconductor or commonly referred to as CMOS.

Usually people call the battery that is attached to the motherboard as a CMOS battery. The battery is what functions to keep the date and other settings that have been set by the user from being lost even though the computer is turned off. 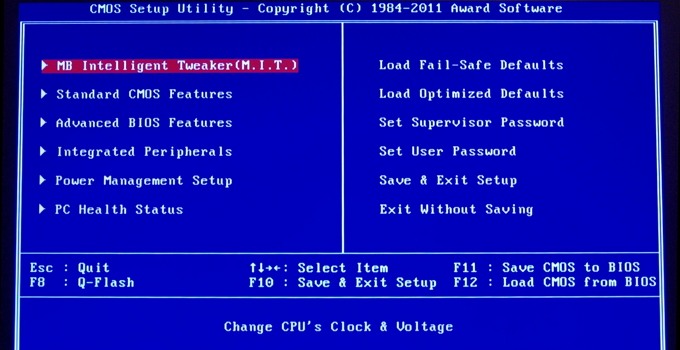 The BIOS has several important tasks such as loading the operating system or what is commonly referred to as booting.

BIOS is also in charge of providing instructions on the microprocessor to turn on the computer.

One of the instructions ordered by the BIOS on the microprocessor is the Power On Self Test (POST) which functions to test the operating status of all hardware on the computer.

Other instructions given to the microprocessor are activating the BIOS chip found in several other components of the computer such as the SCSI and graphics card, checking and managing computer peripherals through low-level routines during the startup process.

Apart from that, other things that the microprocessor does are clock management, hard disk and other settings.

One of the main tasks performed by the BIOS is to regulate the initial stages of the startup process while ensuring that the operating system is actually loaded into memory. In addition, the BIOS functions to do the following:

In addition, the BIOS can also provide information about the hardware specifications found on the motherboard.

2. Setting the Basic Configuration on the Computer

Generally, the BIOS manages the configuration of other devices based on their respective functions.

This configuration setting is usually used by some people, especially gamers to improve the performance of a computer or what is often referred to as overclocking.

3. Providing Basic Information on the Computer

In addition to running the POST command and setting the basic configuration on the computer, the BIOS is also in charge of providing basic information about how the interactions of each important device on the computer such as drives and memory will be in charge of loading the operating system.

So that the BIOS can do its job properly. Then it takes several supporting components, among others:

This program functions to change computer configurations such as the type of hard disk, disk drive, power management, computer performance, and others according to the user’s wishes.

The function of this driver is intended for computer hardware devices such as VGA, input devices, processors and several other devices for the basic 16-bit operating system which is the DOS family.

Program This program plays a role in the boot process into the operating system that we installed earlier.

How Does the BIOS Work?

Initially the BIOS did the initialization process where in the process the user could see computer specifications such as the amount of memory, the type and capacity of the hard disk, information about the VGA card and others.

In addition, the BIOS also checks other ROM devices, such as hard drives and tests RAM.

After all the testing and checking of the device is complete, the next step that must be done by the BIOS is to find a boot location to enter the installed operating system.

The BIOS manufacturer that we often encounter is American Megatrends Inc. (AMI). Actually there are many BIOS manufacturers that we don’t know about. Here’s a complete list of the various BIOSes:

What is BIOS? BIOS or Basic Input Output System is a program that contains a collection of information and configurations about the devices on a computer.

BIOS functions to regulate the boot process when the computer is turned on. In addition, the hardware contained in the computer can also be set through the BIOS so that it can work as much as possible.