Intel officially announced Thunderbolt 4 technology which will be used from the end of 2020.

This technology continues Thunderbolt 3 which was developed several years ago and has become the standard for a variety of hardware technologies such as external storage to monitors.

For the first time, Thunderbolt 4 will offer docks with up to four Thunderbolt ports and universal cables up to 2 meters in length. Intel ‘s upcoming mobile PC processors, code-named “Tiger Lake,” will be the first to integrate Thunderbolt 4.

In Thunderbolt 4, Intel did not add to the pre-existing standard data transfer rate of 40Gbps.

However, the changes given focus on increasing 2x more accessories that can be connected simultaneously, the universal cable feature up to 2 meters and more sophisticated Dock technology.

In a note shared , Intel also explained that the Thunderbolt 4 port will still use the USB-C connector .

Computers that support Thunderbolt 4 (with an 8000 series controller ) can still be connected to accessories with the previous technology, aka still using Thunderbolt 3.

Here is a list of the new features and technologies in Thunderbolt 4 as well as a comparison table released by Intel . 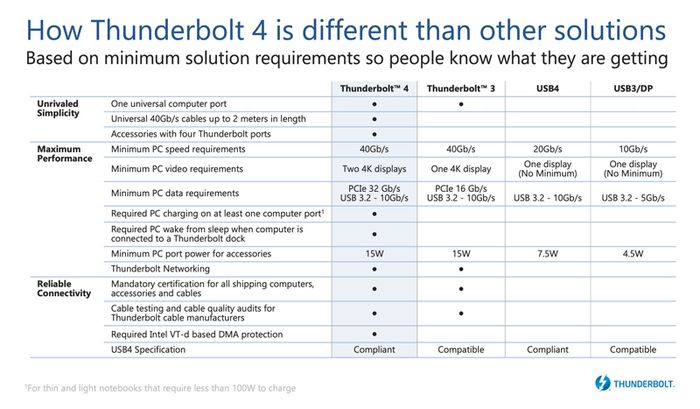 Returning to controllers technology , Intel notes that Thunderbolt 4 will use the 8000 series controller which is divided into 2 types.

See also  AMOLED vs IPS LCD: What's the Difference and Which is Better?

Intel says that the first computers that will support Thunderbolt 4 will be released in late 2020.

What about Apple? For those of you who don’t know, Apple will soon switch from Intel CPU technology and use its own CPU, aka Apple Silicon. This transition process will last for 2 years.

But Apple has made it clear that they will continue to carry Thunderbolt technology on Mac computers in the future.