Matob / Technology What is Nginx and How It Works?

The role of the web server is very important so that the website can run well. Therefore, the selection of a web server must also be in accordance with the needs and performance so far. One of the web servers currently available is Nginx (read: engine-ex). Want to know what Nginx is?

Now! In this article, we will discuss various things related to Nginx such as what Nginx is, the history, advantages, and comparisons of Nginx with other web servers (in this case Apache and LiteSpeed).

Nginx is a web server with reliable performance and has several other powerful features that are easy to configure. As a result, Nginx is able to make your website more powerful and sophisticated.

At the beginning, Nginx was only used for HTTP servers. Along with the development of technology, now Nginx is also used as an HTTP cache, load balancer (HTTP, TCP, and UDP), and proxy server (IMAP, POP3, and SMTP).

In addition to the above capabilities, Nginx can also run on various operating systems, such as Linux, Mac OS X, HP-UX, BSD Variant, and Solaris.

Nginx was originally developed by Igor Sysoev (Software Engineer from Russia) and released in October 2014. At that time there was a problem known as C10k or system performance problems when handling 10 thousand connections simultaneously. Igor tried to try to solve the problem.

So Igor created Nginx which offers high concurrency usage which can handle thousands of concurrent connections with low memory usage. Nginx uses an asynchronous process (executing code before the previous command finishes executing) rather than creating a new process for each line of code execution.

After opening the project publicly in 2004 and seeing continued use of it, Igor tried to develop Nginx and enter the market with Nginx Plus. Nginx Plus is able to handle hundreds or even thousands of connections and has been used by more than 500 business websites on the internet.

How Does NGINX Work?

Before getting to know the meaning of NGINX further, it’s good if you know how a web server works first. When someone ‘sends’ a request to open a webpage, the browser will contact the website’s server. The server then looks for the webpage file requested by the user and sends it to the browser. This flow shows how the server works on simple requests or requests .

The above example can also be referred to as a single thread . Web servers usually create a single thread for each request, but not so with NGINX. As previously mentioned, NGINX runs an asynchronous , event-driven architecture . This indicates that the same or similar threads are managed under a single worker process , and each worker process is made up of smaller units called worker connections . This entire unit is in charge of handling thread requests . Worker connection sends request to worker process , which it also sends to the master process . The master process then displays the results of the request or request .

At first glance, how NGINX works looks easy, but you need to know that a single worker connection can handle up to 1024 same and similar requests. Because of this, NGINX can process thousands of requests without any difficulty. This ability also makes it a server that is often used by high-traffic websites, such as e-commerce, search engines, and cloud storage .

Nginx is the most popular web server in its class and is a data delivery solution for high-traffic websites such as Dropbox, Netflix, and Zynga. To date, more than 385 million websites worldwide, including 100 thousand business websites use Nginx as a web server to deliver their content quickly, reliably, and easily. There are several advantages offered by Nginx:

As an open source load balancer software, Nginx is cheaper and easier to configure than a hardware load balancer. This web server is also designed for modern cloud architecture. Nginx also supports on-the-fly reconfiguration and integrates with modern DevOps for easy monitoring.

2. Nginx is a multifunctional tool.

Apart from being used as a web server, you can also use Nginx as a load balancer, content cache, and proxy server. Since the entire configuration is centered on a single application, the monitoring process will be easier. This of course also minimizes the number of tools you manage.

3. There are various kinds of complete documentation.

If you are new to using web servers, especially Nginx, don’t worry because Nginx provides a variety of tutorials, webinars, and documentation that is quite complete for you to learn.

If you are still confused about Nginx, but still want to use it, you can use Nginx Plus to get customer support facilities. So you can get help diagnosing problems that arise in Nginx.

4. Nginx is still being developed.

Nginx until now continues to be developed seriously. Moreover, for the past decade Nginx has been at the forefront of modern web development and has driven the development of technologies from HTTP to microservices support.

As web content delivery develops, Nginx plans to add and improve features so that there is no flawed data delivery. Nginx also recently announced that it will implement Nginx-tailored JavaScript and support for dynamic modules.

Comparison of Nginx with Other Web Servers

See also  What is Hyperledger Technology?

Apache is another popular web server that rivals Nginx. Currently, about 33.5% of websites on the internet use the Apache web server. This number is not much different from Nginx, which is 34% of the total.

Here’s a diagram that you can also see at W3Techs website. 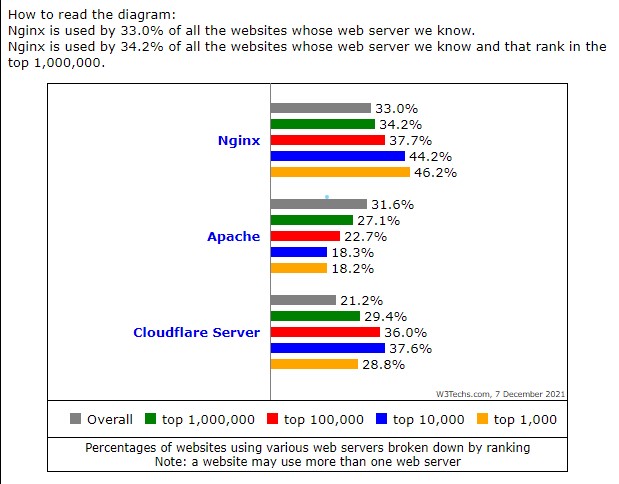 So, what is the difference between Nginx and Apache? If you’re looking for a web server that fits your needs, here’s a quick summary of the feature comparison between Nginx vs Apache.

Compatibility is one of the main details that you need to consider when choosing a software. Both Nginx and Apache can run on a variety of operating systems that use Unix systems. Unfortunately, Nginx’s performance on Windows is not as good as on other platforms/operating systems.

Beginners and professionals alike always need a community that can help them find a solution when they have a problem. Both Nginx and Apache have nearly as strong a community as mailing support and Stack Overflow forums.

When it comes to performance, the power is almost the same, but you could say Nginx is superior. Nginx can simultaneously process more than 1000 static content connections twice as fast as Apache.

However, when compared to using dynamic content, both Nginx and Apache have the same speed performance. So, Nginx is a good choice if it is used to process websites with static content.

LiteSpeed ​​Web Server in terms of popularity is still inferior to Nginx, but in terms of performance, LiteSpeed ​​Web Server cannot be underestimated. If you use LiteSpeed, you can at least get the benefits of Nginx and Apache on one web server. The two combinations of these advantages are Nginx’s event-driven scalability and various management tools such as those provided by Apache.

One of the advantages that LiteSpeed ​​offers is LiteSpeed’s simpler stack and intelligent cache. You can use intelligence cache to override the functionality of third-party proxies. So you don’t need an HTTPS reverse proxy or a third party cache provider. In addition, LiteSpeed ​​compresses first before saving cache files, which Nginx does not do.

Security is a serious issue, which is why LiteSpeed ​​also supports ModSecurity rules which Apache and Nginx also use. However, LiteSpeed ​​does it without sacrificing performance. LiteSpeed ​​Web Server also offers support for using reCaptcha, brute force attack protection, and other anti-DDoS measures that Nginx also has.

Nginx is a reliable web server. Not only that, Nginx also has several additional features that make it easier for users to use manage proxy servers, load balancers, and HTTP caches.

Nginx’s greatness is proven by the trust of various well-known websites from Netflix, Facebook, Twitter, GitLab, Microsoft, DuckDuckGo, IBM, Google, and other big websites. All of these websites entrust Nginx as a web server on their website.

Nginx is a web server that also functions as an email proxy, reverse proxy, and load balancer. The structure of this software is asynchronous and event-driven ; which allows many requests or requests to be processed at the same time. Apart from that, Nginx is also scalable. This shows that this service grows and develops along with the increasing number of traffic coming to the website. Finally, Nginx and Apache are two of the best web servers on the market.