Have you ever heard of the term XML? Maybe you’ve come across files with the XML extension. So, what exactly is XML? You can use this XML to help you understand the basic structure of a website. So, in this article, we will discuss fully about XML, starting from the understanding, the differences between XML and HTML, and the advantages of XML. Read the article carefully so that no information is missed. 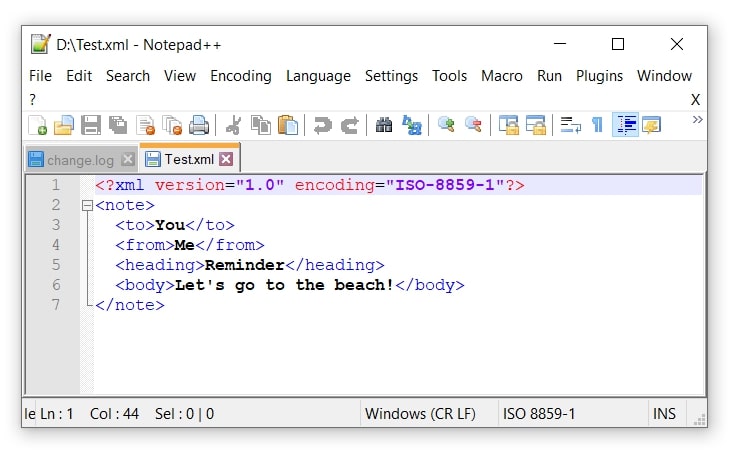 XML is an acronym for extensible markup language . A XML files are used to create common information formats as well as a means to share formats and data used on the World Wide Web , intranets, and on other platforms that use standard ASCII text.

XML itself is often considered similar to HTML. Both XML and HTML contain markup symbols that serve to describe the content of a page or file . However, HTML only describes the content of a web page according to how the page needs to be displayed to the user .  For example, the letter ‘p’ placed inside a markup tag serves to start a new paragraph.

Meanwhile, XML describes the content according to what data is being described by the program. For example, the word ‘ phonenum ‘ placed inside a markup tag can indicate that the data used describes a phone number.

An XML file can be processed completely as data by a program or it can be stored with similar data in another computer. It can also be displayed, like an HTML file . For example, an application on the receiving computer will determine how to handle the XML file . Will it be saved, displayed, or just played.

Well, what distinguishes XML from other markup languages is that its files can be easily expanded by the user. Unlike HTML, XML has an unlimited number of markup symbols and can be defined by the user. XML is often considered a subset of the SGML standard or a standard generalized markup language that is simpler and easier to use for creating document structures.

Typically, XML and HTML will be used together in many web applications. For example, XML markup may be seen frequently in an HTML page.

How to Open an XML File

In fact, XML is a programming language file that is easy to access. Therefore, there are several easy ways to view the file live.

You can open and edit them with the various text editor applications available, view them with any web browser , and use websites that allow you to view, edit, and convert them to other formats.

Here are ways to open XML files based on your choice of platform .

Generally, this one platform is only used by programmers who have often worked with XML files .

Why is that? The reason is, most text editor applications such as Notepad are not designed to display XML files with the right structure.

Perhaps, a text editor application will have no trouble opening the XML file and taking a quick look at it to check the data used.

However, there are still platforms that are more suitable for beginners if they want to use XML

To open it in a text editor application, right-click on the XML file that you want to open. Then, hover over the ‘ Open With ‘ option in the context menu and click on the ‘Notepad’ option.

According to Howtogeek, another way to open XML is with a web browser .

If you don’t really need to edit an XML file and only need to view it occasionally, a browser can be an option for you.

In fact, the web browser that you use often may have been set up by the developer as the default viewer for an XML file .

You simply double-click the XML file to open it in a web browser .

If that doesn’t work, you can right-click the XML file to find the command options to open it. This method works on all available web browsers , especially Chrome.

If you want to edit a file XML occasionally and do not want to download editor a new text, or if you need to convert the file XML into another format, XML editor online is your best piihan.

Today, there are many free editing applications that you can use on the internet, such as TutorialsPoint.com, XMLGrid.net, and CodeBeautify.org.

All of these applications allow you to view and edit XML files .

Once you’re done editing, you can also download the modified XML file , or even convert it to another format.

Difference between XML and HTML

After reading the explanation above, the use of XML to store and simplify the exchange of data, while HTML is used to display data.

Furthermore, you can use various tags in XML, whereas HTML requires special tags to perform a function. In addition, XML is case sensitive, while HTML is case insensitive .

This XML has three constituent structures, the following are the three structures and their explanations.

After knowing the explanation and structure, now we will discuss the advantages and disadvantages of this XML.

So, that’s the discussion about XML. XML itself is a markup language created by the World Wide Web Consortium , this language is used to simplify the exchange and storage of data. XML consists of three structures, namely declarations, attributes, and elements.

Extensible Markup Language has advantages such as, it can be used on various systems because it is an independent programming language. However, XML also has drawbacks such as you can’t use arrays in XML.

If you’re curious about viewing and editing your XML file, you can open the file in a number of ways. There are usually three ways to open a file with an XML extension. You can open it with a text editor, with a browser and also with an online XML editor.