A. UNDERSTANDING THE CELL ORGANEL

B. TYPE OF ORGANEL CELLS

1. Based on its functions related to cell metabolism, organelles are divided into two types namely:

2. Components and Function of Cell Organelles

In cytoplasmic observation, granules which have the basis of dyes binding properties are seen, but staining of ribosomal tumor cells does not bind to base dyes. This granule is initially called the basophil component of the cytoplasm and then also called the granule palade or ribosome. Ribosomes contain many different nucleic acids from those found in chromatin in the cell nucleus. After conducting research using the Fuelgen reaction it turns out that these nucleic acids are negative Fuelgen. Ribosomes are also fine objects consisting of nucleoproteins with a diameter of about 15 millimicrons.

Sometimes in the cytoplasm ribosomes are found arranged in a row with each other that are connected by fine threads of polybosomes and have the function to carry out more complex protein synthesis.

It is clear that the main function of ribosomes is protein synthesis. In its work the ribosome is controlled by a cell nucleus that produces RNA called “messenger RNA” or m RNA and is assisted by “transfer RNA” or tRNA which functions to bind to amino acids in the cytoplasm, also “RNA ribosomes” or rRNAs which all play a role in determine the type, structure and nature of the protein to be synthesized.

The characteristics of the ribosome are:

See also  What is Venn Diagram ? (Complete Explanation and Examples of Use)

The diameter of the mitochondria is around 0.5 millimicrons with varying lengths and the longest is only about 7 millimicrons. The number in cells varies greatly depending on the type of cell and its condition. There are more mitochondria in animal cells than plant cells. Mitochondria are organelles that are very important in the process of energy formation so that mitochondria have many types of enzymes such as Coenzyme A Ligase, enzyme transferase enzymes, respiratory chain enzymes and so forth. Basically the cell’s energy source requires carbohydrates, proteins and lipids, which are usually absorbed from the cytoplasm. Also there are several cycles that support the formation of energy such as the Krebs cycle and several other processes.

The characteristics of the mitochondria are:

Endoplasmic reticulum (RE) is a cell organelle in the form of folds, spaces and membrane tubes that are connected and spread throughout the cytoplasm. Each endoplasmic recticulum has different forms and basically divided into 3 types, namely:

On its surface various chemical reactions take place. Based on the presence or absence of ribosomes attached to the surface, this one organelle can be distinguished from the rough endoplasmic recticulum having many ribosomes for protein synthesis. The protein produced is stored in small pockets called vesicles and the endoplasmic smooth curriculum does not have ribosomes. On its surface there are many enzymes that function for the process of synthesis of fats and glycogen as well as antidotes for drugs and poisons.

The results of protein synthesis which are contained in the endoplasmic recticulum will then be brought into the Golgi apparatus to be released as a result of cell secretion.

The characteristics of the endoplasmic reticulum are:

The Golgi apparatus is a cell organelle consisting of flattened pockets bound by a membrane so that it looks like a pile of bread slices. In the Golgi apparatus cells will form a complex Golgi including the largest cell organ component in the cytoplasm. The parts of the Golgi apparatus are the saccula (in the form of flattened bubbles arranged stacked and interconnected, secretory vesicles (round or oval bubbles at the edge of the mature face) and microvesicles (small bubbles that surround the forming face originate from the rectangular non-granular endoplasm.

Golgi is a place to convert enzymes from the inactive form to the active form, but it also acts as a temporary storage place for proteins and other substances derived from endoplasmic recticulm. Golgi also plays a role in the formation of lysosomes. Golgi apparatus is found in secretory cells and nerve cells that secrete neorutransmitters. The functions and activities of the Golgi apparatus are of several kinds especially for the transportation of proteins out of the cell, the formation of carbohydrates which will be combined with proteins and maintaining the plasma membrane.

The characteristics of the golgi apparatus are:

Lysosomes are single-membrane cell organelles produced by the Golgi complex. In an inactive state, lysosomes are round or oval in shape with an average diameter of 0.4 microns and the numbers in cells are indeterminate. In this lysosome bubble there are various hydroytic enzymes made by ribosomes and can digest macromolecules that enter the cell by intracellular phagocytosis, which is a digestion process that occurs in cells with movements such as eating. In lysosomal cells with hydrolytic enzymes are autofage means that they are able to recycle the organic material of the cells themselves.

In the case of other organelles that die, then this lysosome will approach the organelle and after the membrane has fused it will carry out digestion or destruction of the organelle that has died and then approach the plasma membrane to remove substances or substances that are not useful. The function of lysosomes in destroying other organelles that no longer function is called cytolisosome.

The characteristics of lysosomes are: 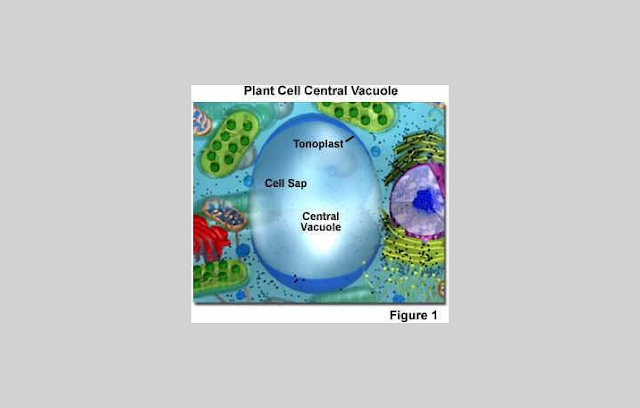 The vacuole is an organelle in the form of large membranous pockets in cells filled with fluid from certain materials and surrounded by a single membrane. Small vacuoles are often called vesicles. The main function of this bubble is as a means of transportation and as a cytoplasmic safety device. Another function of this bubble is to maintain the plasma membrane in the process of secretion and excretion. The vacuole can be found in plant cells and animal cells. In plant cells, vacuoles are large and covered by tonoplasts, a single membrane that regulates the exchange of matter between the cytoplasm and the fluid inside. Vacuoles in plants function to store food substances, harmful metabolic waste products and maintain cell turgor pressure. In animal cells, vacuoles are small and not even found.

Sentriol is an organelle consisting of two microtubular devices. Sentriol does not actively participate in cell metabolism but plays an important role in the process of cell division. Each animal and plant cell has a centriole pair which is located near the cell core membrane and is cylindrical in shape with a diameter of 200 nanometers and a length of 400 nanometers. These pairs of centrioles are in one unit and will divide and then each centriole will go to the poles of cell division. Each of these centrioles will be followed by chromosomes and then will form two new nuclei.

These organelles are present in all cells except bacteria and algae and have the shape of a long, slim tube with a diameter of 250 angstrom units and vary in length. Inside the cytoplasm the microtubules are scattered in cilia and flagella forming longitudinal beams. Its functions in cells are:

These organelles are shaped like threads with varying sizes depending on the type and function of the cell. In the muscle cells found fibrils called microfibrils which have the ability to change its length so that the muscle cells are able to contract. Juag in nerve cells, neurofibrils, which function to deliver stimulation from one part to another. in other cells in general fibrils help microtubules in carrying out their functions as cell skeletons.

Microbodies are small sized organelles lined with a spherical membrane with a diameter of 0.5 millimicrons and named microbodies according to Rhodin’s proposal in 1945, microbodies are found in renal tubules cells in the proximal parts and also in liver cells. Microbodies are divided into peroxisomes and glyoxisomes.

Peroxisomes have oxidative enzymes and catalase. Oxidative enzymes play a role in transferring hydrogen from various substrates to oxygen to form hydrogen peroxide (H2O2) which is toxic. In the presence of the enzyme catalase peroxide compounds can be broken down into water and oxygen.

Glyoxisomes are found in plant tissues that contain fat, especially in seed germination. Glyoxisomes contain enzymes that are able to convert fat into sugar.